What is disruptive technology? – Definition from WhatIs.com

large corporations are designed to work with sustaining technologies. They excel at knowing their market, staying close to their customers, and having a mechanism in place to develop existing technology. Conversely, they have trouble capitalizing on the potential efficiencies, cost-savings, or new marketing opportunities created by low-margin disruptive technologies. 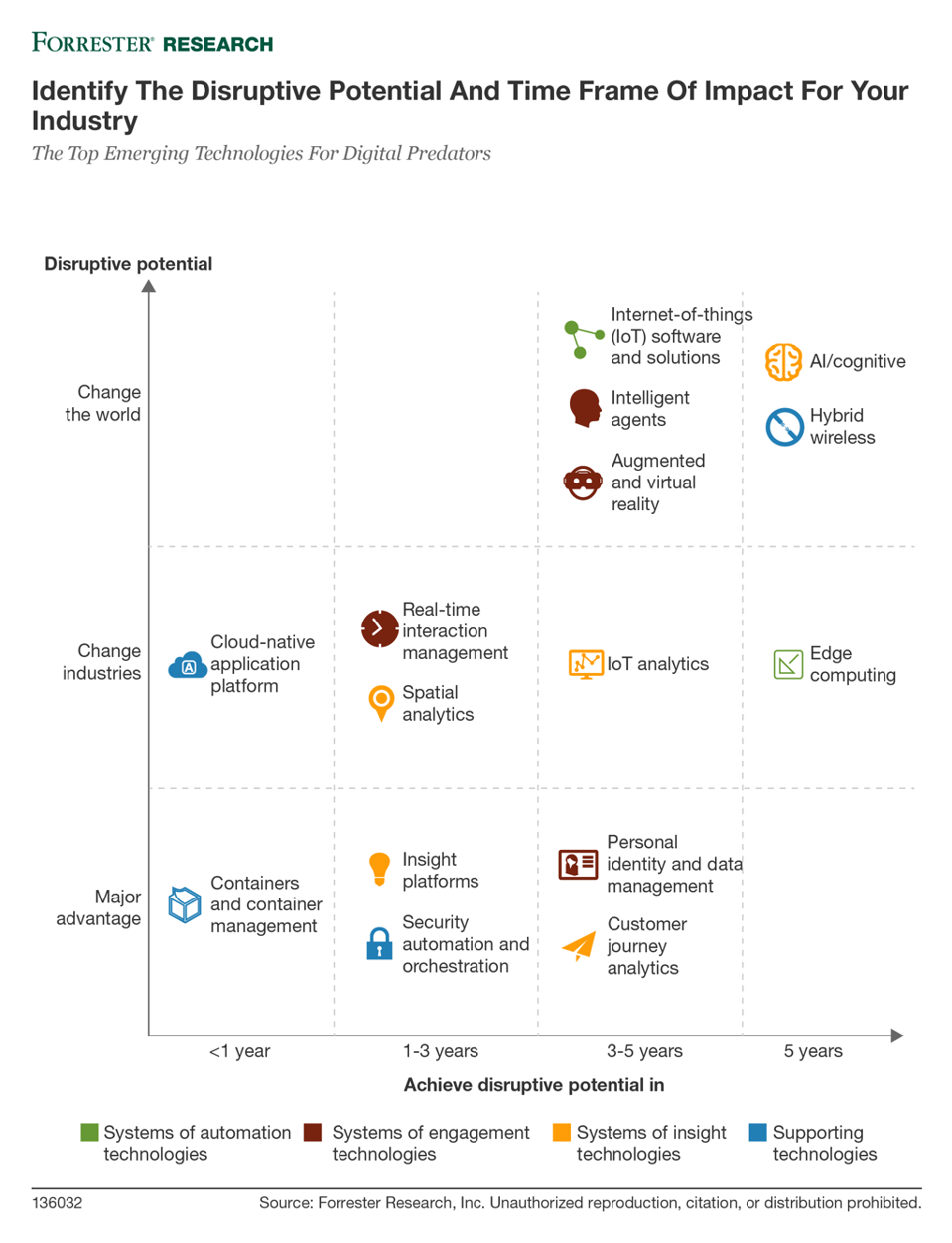 Network technology, disruptive innovation and the future from Mark Smithers

++++++++++
more on disruptive technologies in this IMS blog
http://blog.stcloudstate.edu/ims?s=disruptive+technologies

The Internet of Things (IoT), augmented reality, and advancements in online learning have changed the way universities reach prospective students, engage with their current student body, and provide them the resources they need.
Online Learning
Despite online learning’s successes, many still believe that it lacks the interaction of its in-person counterpart. However, innovations in pedagogical strategy and technology are helping make it much more engaging.

Competency-based education (CBE) recognizes that all students enter a program with different skills and proficiencies and that each moves at a different rate. We now possess the technology to better measure these differences and design adaptive learning programs accordingly. These programs aim to increase student engagement, as time is spent expanding on what the students already know rather than having them relearn familiar material.

The Internet of Things

The Internet of Things has opened up a whole new world of possibilities in higher education. The increased connectivity between devices and “everyday things” means better data tracking and analytics, and improved communication between student, professor, and institution, often without ever saying a word. IoT is making it easier for students to learn when, how, and where they want, while providing professors support to create a more flexible and connected learning environment.

Virtual and augmented reality technologies have begun to take Higher Ed into the realm of what used to be considered science fiction.

More often than not, they require significant planning and investment into the infrastructure needed to support them.

an A.I. professor’s assistant or an online learning platform that adapts to each student’s specific needs. Having artificial intelligence that learns and improves as it aids in the learning process could have a far-reaching effect on higher education both online and in-person.

5 Disruptive Tech Trends That Could Dominate in 2016

Tim Brugger (Big Data): In part because the world around us is becoming “connected” through a growing number of IoT sensors, mobile devices, and the world’s affinity for the Internet, the sheer volume of information available is already staggering.

Daniel B. Kline (endless payment): While subscriptions have always been a factor on the enterprise side of the software business, they’re now moving into the consumer end of things. The leader has been Microsoft (NASDAQ:MSFT), which has managed to move a large part of its Office customer base into a subscription model.

Tim Green (budget smartphones): Zenfone 2 from Asus and the Moto G from Motorola.

Attached below is the entire correspondence:

Who is John Galt?

Hi Plamen.  Honestly and respectfully, the idea didn’t move forward because the planning group wasn’t excited about it and the scavenger hunt group had other ideas for ways they wanted to administer the scavenger hunt.

I apologize for not reaching out proactively to tell you that.

Just curious. Don’t expecting answers. Not that they are coming anyhow…

worse then no hope is false hope: based on my experience working with administration

Our green screen has never been set up for these types of activities. It would be really complex to set it up. I’m quite leery of promoting something with no support and no prospect of support. There are no funds for student help and no one available to manage it. Before our days were cut, I offered to continue with some management, using my normal set of extra duty days. Now there are really no resources to operate the studio.

I think this would be logistically difficult to do and not useful for campus communication.

Hi    .  We continue to brainstorm ideas for promotion of library services for the Library Lawn Party.  Wanting to learn a little more about the green screen…thinking it would be a nice promotion for the studio.  Would you have ideas for how we could incorporate the green screen into the event?  We could get students down to the studio and in front of the screen.

Perhaps we could have them read something on cue cards and then edit it together…you’ve probably seen things like that…where each word in a string is spoken by a different person.

Or could we somehow put students in front of it and put something crazy in the background and have the image stream to a monitor somewhere?

Would either of these ideas be feasible?  Would it be difficult??