Student Engagement with E-Texts: What the Data Tell Us

Although cost savings is often cited as a key advantage of electronic textbooks (aka, e-textbooks or simply e-texts), e-texts also provide powerful markup and interaction tools. For these tools to improve student learning, however, their adoption is critically important. 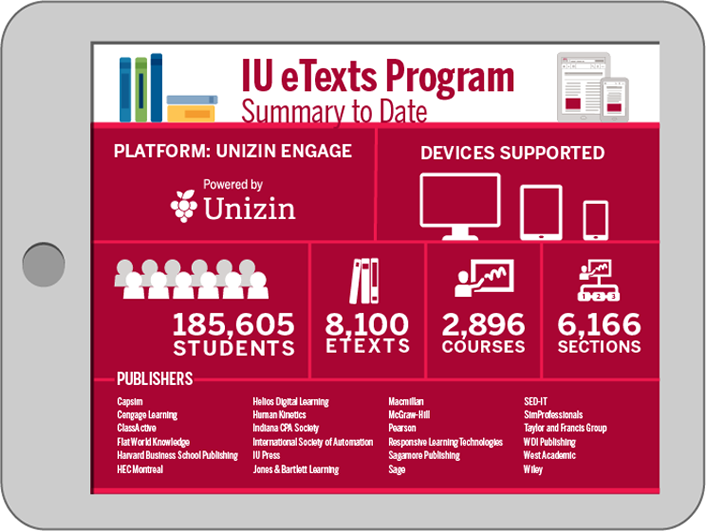 The Indiana University e-texts program, which began in 2009, has four primary goals:

To date, student savings on textbooks amount to $21,673,338. However, we recognize that many students do not pay the full list price for paper textbooks when they purchase online, buy used copies, or recoup some of their costs when they resell their texts after the semester is over.
herefore, we divide the calculated savings by two and report that total as a more accurate representation of student savings. Consequently, we claim that students have saved about $11 million since IU’s e-texts program started in spring 2012.

In addition to printing through the e-text platform, students can purchase a print-on-demand (PoD) copy of an e-text for an additional fee.

One downside of e-texts is that students lease their textbook for a limited time instead of owning it. This lease generally lasts a semester or six months, and students lose their access afterwards. However, with IU’s e-text model, students get access to the textbook before the first day of class and maintain their access until they graduate from Indiana University. That is, students can go back to the e-texts after their course to review or reference the content in the book. This could be especially important if the e-text course is a prerequisite for another course.

Indiana University’s Brad Wheeler explains how his institution is ditching the college textbook and replacing it with digital alternatives that are accessible to students from day one.

Brad Wheeler, the vice president for IT and CIO of Indiana University

it’s taken a long time for textbook publishers to own up to the “fundamental flaw” of their industry: “They are obsessed with counting their gross margins on the things they actually do sell.” And, he added, they ignore the enormous amounts they lose through the other 75 percent of the market made up of used and rented books and other kinds of substitutes. Because of those blinders, the publishers have “long pursued a model that has been failing, year over year.”

Starting in the mid-1990s, the price of educational books rose faster than just about any other measure, including healthcare. Something had to give. Wheeler has seen a “constellation of things” forming to bring about change. First, the e-reader software has matured, he said. “It works on your phone, your tablet, your laptop.”

Second, students are “increasingly digital.” They’re “comfortable with interacting with digital information [and] electronically marking it up.” After all, he noted, “some of them went through high school with digital books and materials.”

Third, familiarity is growing among faculty too. “They see e-texts not just as a substitute for paper, but as a teaching and pedagogical tool. They can go in and annotate that paragraph in the textbook and point to classroom materials or go online and correct something,

Fourth, the printed textbook-first philosophy has stopped paying off for publishers.

The three biggies — Pearson, McGraw-Hill and Cengage — weren’t first in line to sign on, even as additional universities piled onto Indiana U’s project. As a result, their reticence to promote textbook alternatives hit their bottom lines. Eventually, Pearson’s shares took a hit, hovering currently around $8; McGraw-Hill’s education division was peeled off and sold to Apollo Global Management in 2013; and just months later Cengage filed for bankruptcy, emerging a year later with $4 billion less debt.

the College Board decreased the undergraduate student budget for books and supplies in its “Trends in College Pricing” report.

Indiana U has seen nothing but growth for its IU eTexts digital initiative:

Unizin. This is the organization created by Indiana U and other large institutional partners to develop services that could replace major paid third-party applications, such as learning management, digital textbook and data warehouse platforms. The goal: to enable higher ed to own its data.

The movement is also aiming to reimagine and democratize learning technologies.

Connexions: A place for teachers, students, and professionals to search and contribute scholarly content, organized into “modules” or topic areas instead of entire textbooks.

CK12 FlexBooks: A nonprofit that aims to reduce the cost of textbook materials by encouraging the development of what they call the “FlexBook.” Anyone can view or help create these standards-based, customizable, collaborative texts.

Shmoop: An up-and-coming collection of freely shared, expert-written content (most Shmoop authors are Ph.D.s and high school or college-level educators) with the goal of inspiring students and providing tons of free resources to teachers that include writing guides, analyses, and discussions.

MIT Open CourseWare: The Massachusetts Institute of Technology publishes nearly all of its course content on this site, from videos to lecture notes to exams, all free of charge and open to the public. Many other universities are doing the same, often using the content management system EduCommons.