Very useful set of visuals in easy-to-browse format, with links to explore. “What’s Happening With State Budgets and #HigherEd” https://t.co/Mk9rjztXQa

+++++++++++++
more on finances in higher ed in this IMS blog
https://blog.stcloudstate.edu/ims?s=higher+ed+finances

Bryan Alexander’s analysis of the the situation with Corona Virus and Higher Ed has wide response on Twitter:

What does #COVID-19 mean for #highereducation ?
My thoughts on looking ahead:https://t.co/oRVyx8riWI

++++++++++++
more on Bryan Alexander in this IMS blog
https://blog.stcloudstate.edu/ims?s=bryan+alexander

What’s the Role of the Chief Academic Technology Officer?

Research from the Center for Higher Education CIO Studies (CHECS) has been transferred to EDUCAUSE, including a report on the role of the Chief Academic Technology Officer and its differences and similarities to other higher ed IT tech executives.

The Chief Information Officer (CIO) study provides information about higher education CIOs’ attributes, education, experience and effectiveness. The CIO study was conducted from 2003 to 2018. Find all the CIO reports here.

The Technology Leadership (TL) study surveyed those in the next organizational layer down from the CIO.  The TL study examines the demographics of the TL, where they have worked, and the activities they are undertaking to prepare themselves to become CIOs.  The TL study was study was conducted from 2009 to 2018. Find all the TL reports here.

The Chief Information Security Officer (CISO) study examines the demographics of the higher education CISO, the career route they have taken to their role, and the activities and attributes needed for a CISO according to the CISO and the CIO. The CISO study was study was conducted from 2014 to 2017. Find all the CISO reports here.

What to Expect in an Era of Disruption in Higher Education

1. Determine what the customer craves and deliver it. In the case of college and university students, there are limits. Balancing student wants and desires with what they actually need to be successful students and engaged citizens can, in fact, be extremely challenging. “The customer is always right” philosophy practiced by many businesses simply does not fit with the mission of postsecondary institutions. Instead, the role of educators is to advance and apply knowledge, facilitate the exploration of ideas, foster cognitive dissonance, prepare students as lifelong learners and productive workers, and even, hold them accountable for their actions or inactions. Ideally, the college experience should be transformational—helping students become the best person they can be. With that said, failing to align teaching methods, curriculum, academic programs, and institutional services with the needs and expectations of students is a perilous path.

2. Create unexpected value. Incumbent institutions tend to focus on known problems (e.g., student attrition causation factors, poor service delivery, cumbersome processes, undersubscribed programs, insufficient class availability). True disruption seldom occurs in this space. Creating value where it did not exist before or was not expected spawns disruption. In the private sector, such intuitive value ideation is seen in Disney’s “Imagineering” the attractions in its theme parks, Apple’s invention of the iPhone, and Airbnb’s alternative to staying with the multitudes at expensive, disturbingly uniform hotel chains. This is what the authors of Blue Ocean Strategy characterize as swimming in the “blue ocean”, where there are few, if any, competitors (Kim, W. C. & Mauborgne, R., 2005). No disruptor is found in the “red ocean” crowded with similar competitors.

3. Avoid being average. If your school is one of the elite, well-known few, with highly selective admissions, it is not average. However, the vast majority of colleges and universities do not fit this profile. They have to find other ways to distinguish themselves. A capstone student experience, an innovative curriculum, guaranteed internship placement or study abroad, digital career portfolios, or a unique pricing model represent just a few examples. While it would be ideal to find something that makes your institution distinctive throughout the nation or the world, that is highly improbable. A more attainable goal is to position your institution uniquely among your direct competitors.

4. Identify the potential for expansion. As it relates to student enrollment growth, expansion opportunities are usually found within one or more of four domains: (1) thorough penetration of your existing primary market, where the institution and its academic programs have a strong presence, (2) the introduction of new programs into your primary market, (3) promotion of the institution and existing programs in a new market, and (4) diversification—new programs and new markets. Each domain has inherent risks and potential rewards. Risk levels are illustrated in Figure 1 and are described here.

Primary market penetration possesses the lowest risk, requires the least investment of resources, and has the fastest return on investment. Depending on an institution’s primary market, this domain also may produce only modest new enrollments. Option two, mounting new programs in an institution’s existing primary market has risks associated with conducting the proper market research to determine student and industry demand as well as market saturation. Another common risk relates to the degree to which new program offerings are adequately promoted. An obvious upside to this domain is that the institution already has visibility in the market. Taking the current program array to a new marketrequires the time and resources to develop a presence where none has previously existed. Sending recruiters to a new territory once or twice a year is woefully insufficient. Creating such visibility requires a sustained physical presence with area recruiters or alumni volunteers, targeted advertising, networking with schools and other organizations in the region, and strategic partnerships. Finally, diversification carries with it the highest level of risk because it involves assuming all the risks of launching new programs in a market with no prior visibility. If executed effectively, however, this domain can generate an abundance of new students. 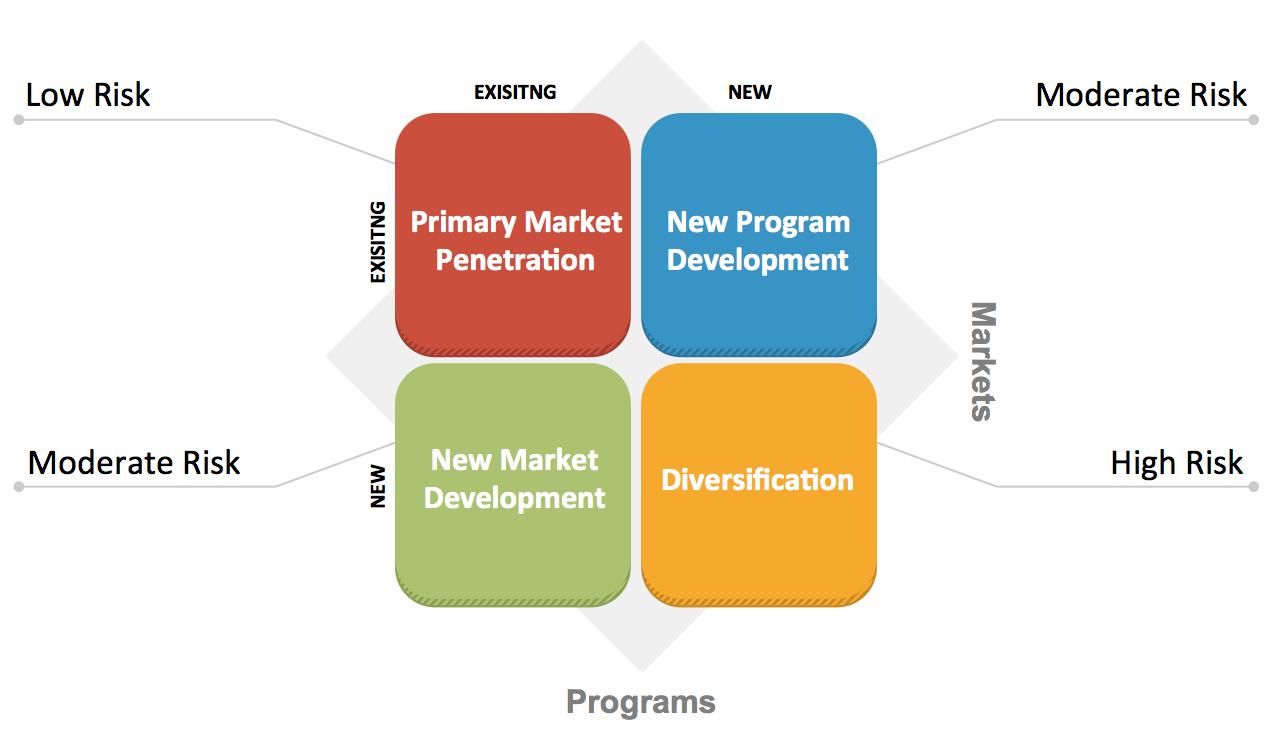 5. Disruption always comes at a cost. It is true that your institution may create a disruption by leveraging existing technologies and human capital. Yet, no organization can avoid the cultural and real costs associated with unlearning old ways, creating new programs and business models, scaling innovations, or marketing a new approach. These costs must be weighed judiciously against potential benefits of such a paradigm shift. Once a decision is made to pull the trigger, the change process must be managed carefully with the upfront inclusion of key stakeholders.

6. Equate disruption with innovation, not extinction. The rise of educational disruptors can be unsettling. If disruption is simply perceived as a threat to the way of life in the academy or ignored, the results will be devastating for many higher education institutions. Conversely, if disruption pushes college leaders and enrollment managers out of their comfort zone and they reinvent their institutions, the educational experience of students will be greatly enhanced. In a time of creative destruction, the winners are those who exert extraordinary efforts to go beyond traditional norms, which is not always the early adopters of a new educational model or practice.

7. Successful disruptors pursue four disciplines simultaneously. The four disciplines translated into the higher education lexicon include low costs, relational connections with students, program innovations, and rapid time-to-market. Of these, student connections is the only discipline college and universities excel at consistently. To thrive in a future with a seemingly infinite number of nimble disruptive innovators, educators must compete in the other three disciplines as well.

Survey: University Deans Predict Significant Change in the Next Decade

new study, “The State of Innovation in Higher Education,” in which 2U and the Academy for Innovative Higher Education (a partnership between Arizona State University and Georgetown University) polled 109 deans across the country about their views on innovation in higher ed. Sixty-one percent of respondents come from public universities and 60 percent have at least five years of tenure in their jobs.

The survey findings reveal a mix of confidence and concern about an uncertain future for U.S. higher education:

“We also found that, amid rising tuition prices and student debt, most deans still believe that higher education is a good return on the investment,” added Selingo.

The full report is available here.

++++++++++++++
more on administration about university future in this IMS blog
https://blog.stcloudstate.edu/ims/2015/10/20/university-presidents-about-the-university-future/

Statement by the Association of Pennsylvania State College and University Faculties