Blockchain Disciples Have a New Goal: Running Our Next Election

Amid vote-hacking fears, election officials are jumping on the crypto bandwagon — but cybersecurity experts are sounding an alarm

Aaron GellJun 18
https://medium.com/s/the-crypto-collection/blockchain-disciples-have-a-new-goal-running-our-next-election-2bfe4dff3c7
At democracy’s heart lies a set of paradoxes: a delicate interplay of identity and anonymity, secrecy and transparency. To be sure you are eligible to vote and that you do so only once, the authorities need to know who you are. But when it comes time for you to mark a ballot, the government must guarantee your privacy and anonymity. After the fact, it also needs to provide some means for a third party to audit the election, while also preventing you from obtaining definitive proof of your choice, which could lead to vote selling or coercion.
Building a system that accomplishes all this at once — and does so securely — is challenging enough in the physical world. It’s even harder online, as the recent revelation that Russian intelligence operatives compromised voting systems in multiple states makes clear.
In the decade since the elusive Satoshi Nakamoto published an infamous white paper outlining the idea behind bitcoin, a “peer-to-peer electronic cash system” based on a mathematical “consensus mechanism,” more than 1,500 new cryptocurrencies have come into being.
definition: Nathan Heller in the New Yorker, in which he compares the blockchain to a scarf knit with a single ball of yarn. “It’s impossible to remove part of the fabric, or to substitute a swatch, without leaving some trace,” Heller wrote. Typically, blockchains are created by a set of stakeholders working to achieve consensus at every step, so it might be even more apt to picture a knitting collective creating that single scarf together, moving forward only when a majority agrees that a given knot is acceptable.
Unlike bitcoin, a public blockchain powered by thousands of miners around the world, most voting systems, including Votem’s, employ what’s known as a “permissioned ledger,” in which a handful of approved groups (political parties, election observers, government entities) would be allowed to validate the transactions.
there’s the issue of targeted denial-of-service (DoS) attacks, in which a hacker directs so much traffic at a server that it’s overwhelmed and ceases to function.
Although a distributed ledger itself would likely withstand such an attack, the rest of the system — from voters’ personal devices to the many servers a vote would pass through on its way to the blockchain — would remain vulnerable.
there’s the so-called penetration attack, like the University of Michigan incursion, in which an adversary gains control of a server and deliberately alters the outcome of an election.
While it’s true that information recorded on a blockchain cannot be changed, a determined hacker might well find another way to disrupt the process. Bitcoin itself has never been hacked, for instance, but numerous bitcoin “wallets” have been, resulting in billions of dollars in losses. In early June 2018, a South Korean cryptocurrency exchange was penetrated, causing the value of bitcoin to tumble and resulting in a loss of $42 billion in market value. So although recording the vote tally on a blockchain introduces a new obstacle to penetration attacks, it still leaves holes elsewhere in the system — like putting a new lock on your front door but leaving your basement windows open.
A blockchain is only as valuable as the data stored on it. And whereas traditional paper ballots preserve an indelible record of the actual intent of each voter, digital votes “don’t produce an original hard-copy record of any kind,”
In the end, democracy always depends on a certain leap of faith, and faith can never be reduced to a mathematical formula. The Economist Intelligence Unit regularly ranks the world’s most democratic counties. In 2017, the United States came in 21st place, after Uruguay and Malta. Meanwhile, it’s now widely believed that John F. Kennedy owed his 1960 win to election tampering in Chicago. The Supreme Court decision granting the presidency to George W. Bush rather than calling a do-over — despite Al Gore’s popular-vote win — still seems iffy. Significant doubts remain about the 2016 presidential race.
While little doubt remains that Russia favored Trump in the 2016 election, the Kremlin’s primary target appears to have been our trust in the system itself. So if the blockchain’s trendy allure can bolster trust in American democracy, maybe that’s a net positive for our national security. If someone manages to hack the system, hopefully they’ll do so quietly. Apologies to George Orwell, but sometimes ignorance really is strength.

Founded in 2014 by Vitalik Buterin, Gavin Wood, and Jeffery Wilcke, Ethereum is one of the fastest growing blockchain technology-based platforms and a cryptocurrency like bitcoin.

Ripple was developed in 2012. Currently, the cryptocurrency that represents Ripple blockchain, XRP, is one the high performing cryptocurrencies in the crypto world.

Based on the blockchain technology, Hyperledger offers distributed ledger frameworks to a variety of industry leaders in the fields of banking, finance, Internet of Things, supply chains, manufacturing, and technology.

Developed using the base of Hyperledger, IBM Bluemix offers transparency in transactions and security in information for enterprises. At present, IBM Bluemix runs on the IBM cloud.

Multichain is one of the best Blockchain platforms that enables the creation and execution of private blockchains. This multi-asset exchange is becoming popular for solving real problems in finance, infrastructure, and e-commerce.

With the above-mentioned blockchain platforms, you can get unprecedented services for the security of digital transactions and assets. The blockchain technology provides independent and secure work structure and is a reliable solution that can be utilized to streamline an organization’s processes and transfer of assets without getting into any extensive documentation or periodical controls.

++++++++++++
more on blockchain in this IMS blog
http://blog.stcloudstate.edu/ims?s=blockchain

In a consortium blockchain, the consensus process is controlled by a pre-selected group – a group of corporations, for example. The right to read the blockchain and submit transactions to it may be public or restricted to participants. Consortium blockchains are considered to be “permissioned blockchains” and are best suited for use in business.

Semi-private blockchains are run by a single company that grants access to any user who satisfies pre-established criteria. Although not truly decentralized, this type of permissioned blockchain is appealing for business-to-business use cases and government applications.

Anyone can read a public blockchain, send transactions to it, or participate in the consensus process. They are considered to be “permissionless.” Every transaction is public, and users can remain anonymous. Bitcoin and Ethereum are prominent examples of public blockchains.

Unicef recruits gamers to mine Ethereum in aid of Syrian children

The UN’s children’s agency, Unicef, has launched a futuristic pilot project to utilise the cryptocurrency Ethereum to raise money for Syrian children.

the “blockchain” technology associated with the cryptocurrency – the world’s second largest after the controversial Bitcoin – to revolutionise not only how aid organisations raise money but also to increase transparency in their financial transactions.

Blockchain – which emerged as one of the underpinnings of Bitcoin – is a shared record of transactions maintained by a network of computers. It has become a key technology because of its ability to record and keep track of assets or transactions with no need for middlemen.

With a valuation of some $88bn (£62bn), Ethereum – which launched in 2015 – has an equivalent market value to Starbucks, according to Forbes magazine

The World Food Programme (WFP) has used Ethereum to deliver $1.4m in food vouchers, via the use of iris recognition scanners in camp supermarkets, to around 10,000 Syrian refugees in Jordan, 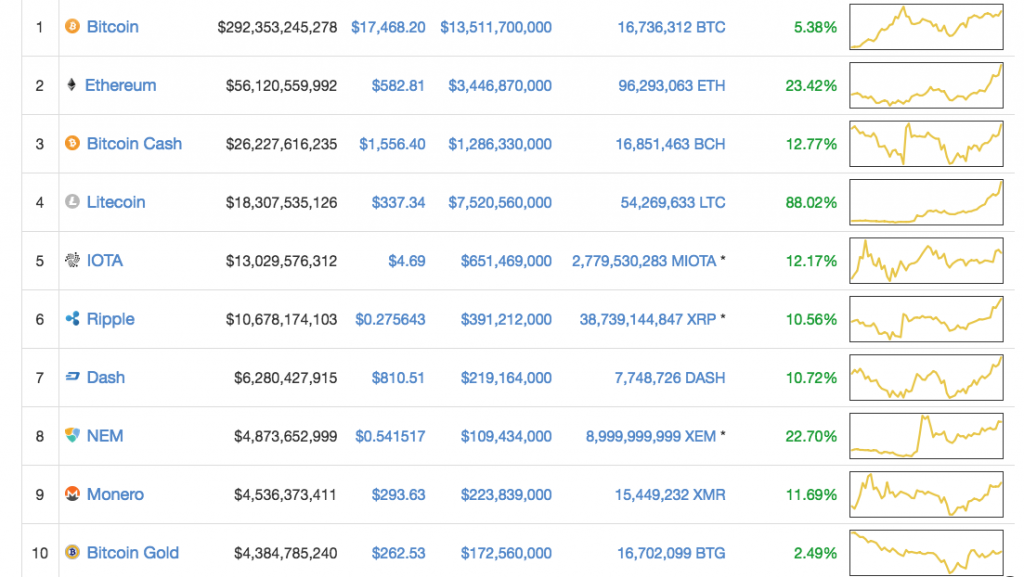