Educators are in an arms race these days against an industry that seeks to profit by helping students cheat. Some websites offer to write papers for students, others sell access to past tests by individual professors, and others will even take entire online courses for students, as a kind of study double.

question to Tricia: the aggressiveness of the Websites. radio silence by governments, universities.

is there a data on contract cheating: data from Australia, UK. 7 Mil students worldwide engaged in contsure

punitive vs preventive practices.
students being educated for that matter faculty.
stakeholders: students, faculty (accreditation), parents, administration. what the forces in place to keep in check the administration/
how does the education happen in a world where the grade is the king and the credit is the queen?
If i organize a workshop on cheating noone attends; overworked

clear and better policies: what is the role of the faculty in the process. when teaching and learning is not sufficient and needs to move to allegations.

+++++++++
more on cheating in this IMS blog
http://blog.stcloudstate.edu/ims?s=cheating

More university students are using tech to cheat in exams

students were caught cheating with smart watches over the period examined, and cases of students using hidden earpieces or miniature cameras were reported at multiple universities.

The Guardian found multiple websites that openly targeted students with devices that could be used for cheating.

prevent cheating could be to write better exams.

How Educating Students About Dishonesty Can Help Curb Cheating

How Educating Students About Dishonesty Can Help Curb Cheating

Cheating remains a stubborn problem at many schools. According to the Educational Testing Service and the Ad Council, who define cheating as “representing someone else’s work as your own,” cheating tends to start in junior high, peak in high school, and occur most often in math and science classes. Men and women cheat in equal measure, both sexes aided by the ubiquity of computers and the internet, and most cheaters aren’t caught. Both high- and low-achieving students find ways to misrepresent their work, explaining away their misconduct with familiar rationalizations: everybody does it, it’s a victimless crime, and getting the grade matters more.

while few cheat a lot—20 of the 40,000 involved in the experiments—many more—about 28,000—cheated a little bit. Most everyone has what he calls a “personal fudge factor” that allows for just a little dishonesty, provided that the conditions are right. For example, if people see others cheating without consequence, they’re more apt to do the same; social norms permit it. If cheating seems to benefit a “good cause,” even more feel comfortable deceiving.

more on cheating and academic dishonesty in this IMS blog

2001 article that illustrated nicely the challenge we face in helping students do their work with integrity.

the form of plagiarism continues into graduate school, where plagiarism remains, by far, the most common form of academic dishonesty.

the article repeats to a degree what is already known:

namely, that plagiarism is in a much smaller degree intentional and to its largest percentage lack of systematic approach and clear directions by faculty toward students.

Rebecca Moore Howard, a professor of writing and rhetoric at Syracuse University, has called “patchwriting,” or borrowing large sentence structures and vocabularies from a source and only swapping out the occasional word or phrase with language of their own.

academic integrity represents an incredibly complex subject to master: It encompasses knowledge (What are the rules of academic integrity? How do they apply in this context?), skills (How do I summarize or paraphrase this passage without plagiarizing? How do I credit the work of others when I am collaborating with peers or using sources?), and values (Why does academic integrity matter? Why should I care about it?).

“Those who do not want to imitate anything, produce nothing.” ― Salvador Dalí

Nice short visual online tutorial, which can help with ideas…:

A charter chain thinks it has the answer for alternative schools

Critics complain that the schools lack rigor and often use software programs vulnerable to cheating, such as Edgenuity. https://www.edgenuity.com/login/

Bixby also pushed back on the idea, expressed by some alternative school critics, that students in traditional classrooms, with teachers who each see over 150 pupils a day, are assured a more meaningful experience. Altus students are assigned to one main teacher who becomes responsible for each of their students’ progress throughout their time in the program. The network aims to assign no more than 40 students to each teacher so that they have time to get to know them. And all instruction is delivered one-on-one or in small groups.

Announcing Proctor-ring, a new biometric tool in the war on cheating.

Starting today, Online Learning has partnered with the Academic Integrity Task Force and that import shop in the strip mall on Hwy 99 to provide a new, low cost option for improving the integrity of your exams. The Proctor-ring uses mood ring technology to identify common changes in human emotion that have been calibrated to identify academic dishonesty. While many vendors will sell you very expensive tools to combat cheating, the Proctor-ring is cost effective and scales well across all disciplines. 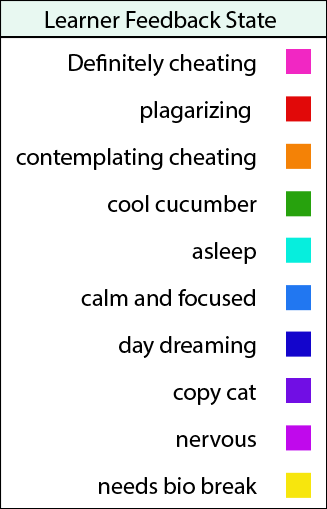 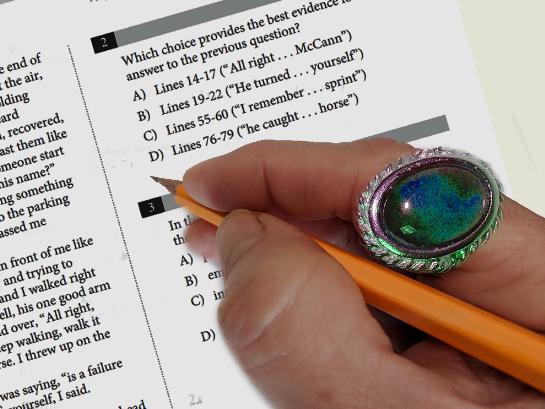